Art Against Living Miserably: Get involved

Last year my lovely friend M took his own life.  I saw him a few weeks beforehand. He was looking well, revitalized from a recent trip to New York and getting ready to launch his new album. We discussed photographic ideas for the cover.

M was not only a top notch humanitarian and all round super guy but also was a massive put money where your mouth is supporter of my art work.  He and a friend would pop round the studio, where our sessions would be more like the dirty grips of counselling than love fests, but always authentic and meaningful. Michael did loads of proper work for charity as well as working and being a regular gigging musician and poet.

He often suggested that he and I collaborate on starting group sessions^drop ins for high functioning people with depression. It wasn’t something I had the time, energy or inclination to do. But now, one year one and  being in such a different place (no more high stress shit job, retraining to be a psychotherapist etc) it’s a different story, but hindsight’s a bitch isn’t it.  He was an active supporter of the charity CALM. M didn’t talk about his struggles with many folk. 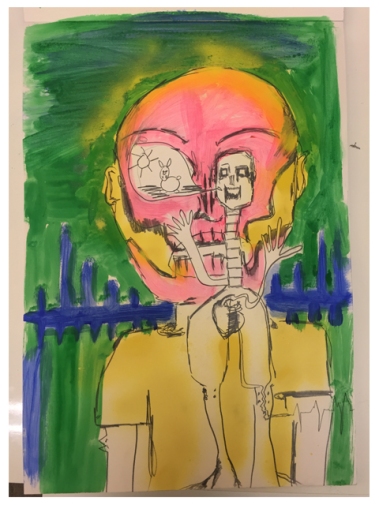 Maybe the stigma, maybe just wanting to keep whatever strings were holding it together as strong as possible, I don’t know. We’d been friends for several years, before he witnessed me during an explicitly bad crash and burn period and from there the honesty and compassion grew in our friendship. We suddenly both had a friendship bonded by all the shit we kept to ourselves.

But that was then.

He worked really fucking hard at maintaining positive mental health. When he died, I was in absolute devastating shock. But also, thought, if he who did all this therapy and mindfulness succumbed to it, what fucking chance do i have?

In 12 hours, the contract I was depending on financially ended, M took his life and the hat trick of some questionable behavior by my OH raised its head.

Cue 3 months of self medicating wine drinking. Which led me to my decision to take a year off everything and get my shit together. Because I was miserable.

I painted this. I tore it up, taped it, plastered it back together and then painted it some more. I’m going to submit it to CALM for their art thing. It doesn’t quite meet their brief, but you don’t get if you don’t ask.

When I’m ready I am still going to recreate the neon ghosts photos for the album. It’s taken a year and I still think of him. His memorial is coming up in a few weeks.

Just need to kick at the darkness until it bleeds daylight.